Photographer Chris McLennan spent some time in Africa earlier this year and wanted to take some unique images of the lions. He wanted to get as close as possible to the big cats and so he modified a small 4×4 remote control toy buggy  and put a camera on top of it – all with a very minimal budget.

McLennan decided to use his D800E camera but he didn’t want to take the chance that the lions he wanted to shoot would destroy it (smart move on his part) so he put it inside a aquatech sound blimp for protection. He used a wide angle lens (18-35mm set to 18mm) with manual focus and had the camera shoot an image every few seconds (a good option if you don’t have an option to control the camera or see what you are shooting – although cameras such as the Canon 6D/70D and Nikon’s D5300 already allow some level of control and remote Live View from your mobile device).

The resulting images McLennan got were amazing (watch the end of the video above). The special thing here is that McLennan did all of that with a very limited budget (relatively speaking). In the past National Geographic photographers such as  Michael “Nick” Nichols and Nathan Williamson shot lions using much more expensive robotic solutions (see out National Geographic: Photographing Lions With Robots), however McLennan proved that it can be done in a DIY style with equipment that anybody can get pretty easily (you can even improvise the sound blimp if you don’t want to pay for one).

Below is another National Geographic video of a shooting robot – this time with Photographer Steve Winter who faced a tiger with some interesting results. 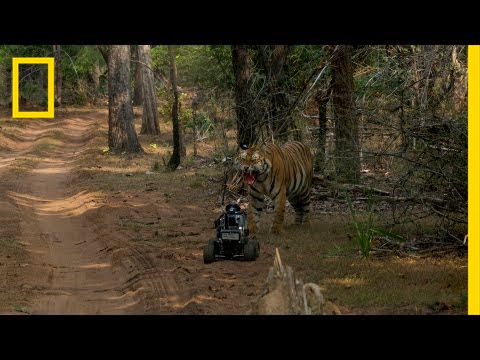