On this video photographer, Daniel Schiffer demonstrates how you can use a very simple low-cost home setup and make a cool a looking commercial using a few video editing tricks. As with previous videos Schiffer uses Final Cut Pro 10 although you can do most if not all of the “tricks” shown in this video in most other editing software as well.

Beverage commercials are all over the internet and TV these days but it doesn’t necessarily mean that you must have one of those super high-end video shooting robots (although these are super cool – just watch some of the videos we published on how they work and what you can do with them in the past).

Schiffer uses a very basic setup with a single light and a foam-board reflector and a chair that swivel (we would recommend getting a turntable – even the motorized ones are not that expensive these days) and he shoots using a foldable blue screen (since the can he shoots has some green writing – otherwise a green-screen was just as good).

He then goes to the Final Cut Pro 10 software and starts working, first he key the blue background, adds some directional blur using keyframes at the start of the shot (which is zoomed in – again using keyframes). Schiffer creates a speed ramp and creates a sort of stop for the last part for adding text. He also adds an artificial blue background which he replaces with a beach clip which he uses and plays around with the light wrap to help bled the exposure of the background and foreground (this is a very delicate process).

Schiffer also shows how he grades the video, makes the can larger and add another background layer on top of the can layer but only have the sand covering the lower part of the can help it look more “in the scene”. Finally, he adds some music and text.

So as you can see there are a ton of things that can be done even when shooting at home with a very basic setup as long as you are willing to sit down and do some solid work in post. The video below takes this a step further and shows you how you can do an outdoor style Tequila commercial when shooting indoors using a TV as a background (something that we explored in some previous articles as well both for stills and for video). 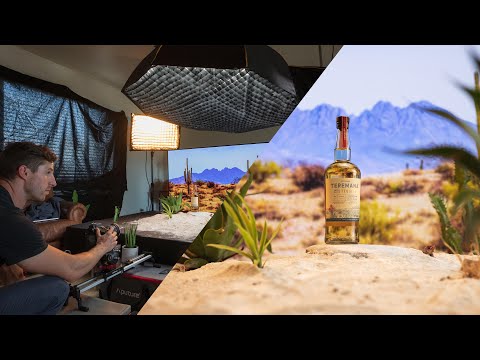 You can find many more of Schiffer’s cool videos here. For more epic b-roll videos – check out our new epic-b-roll list.

In this video photographer, Gavin Hoey looks at shooting a model the right way in a…

In this video, Unmesh Dinda from the PiXimperfect channel demonstrates how you can fix wrinkles…