In this video, Nikolas Moldenhauer from the fantastically inspiring YouTube channel Media Division takes a look at using robots for filmmaking and creating complex motion control scenes with robots that would otherwise be extremely difficult using any other methods. He also shares some interesting tips on how you can use simpler, and more affordable sliders and motors to create truly cinematic scenes on a budget with miniature models.

Moldenhauer had a unique chance to visit the German production company The Marmalade which uses high-speed industrial robots programmed to perform extremely precise movements with cameras and products for some really outstanding results.

He demonstrated how he shot the intro for his channel which forms a complex M latter with him running through the different parts (you really need to pay attention as this is a very complex scene to shoot but if you are not looking too closely it might look simple.

It is important to understand the risks when working with these industrial robots – they move very quickly and one small programming mistake or wrong move by an actor and serious injury can occur. This is also why Moldenhauer demonstrated how he connects a sword to the robot and let it almost cut his head, but in reality, the whole scene was shot in two parts and the part with the sword moving was shot without him in the frame (it was superimposed in after effects later) and even the sword itself was a dummy.

Using industrial robots as part of video productions is nothing new. Nikon had been showing their high-end cameras working with these types of robots on many of the recent tradeshows and large production houses around the world have been using them for quite some time.

The main reason why these robots are still only used in high end commercial and movie productions is that they are extremely expensive (up to half a million dollars and sometimes more), complex to operate and program and also, as we mentioned potentially dangerous to handle (not to mention very bulky).

On the video below from 2018, Marques Brownlee (MKBHD) shows how he plays with Kira – the industrial robot which can be controlled using a game controller 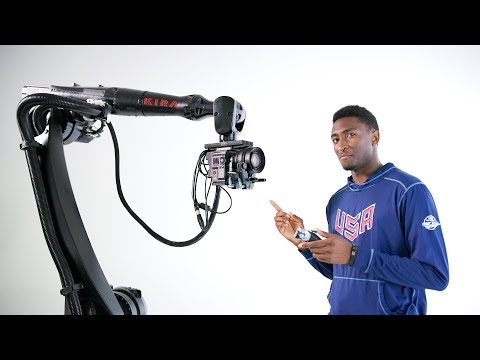