NAB which just ended didn’t bring too many cameras or lenses this year but there were plenty of new lights and lighting technologies and we made a short list of the main ones and some of the info we know about them.

We will start with Aputure, the rising star of lighting in recent years which continued to innovate with a several new products (see video above) including the second generation C300 (called the LS C300d MKII) which is 20% brighter than the first generation has improvements in the batteries and controller, better cable management, built-in WIFI and more. It will be shipping at the beginning of summer 2019 for around $1,200.

The second product from Aputure is the AL-MC Pocket Light. This tiny unit feature continues dimming from 0% to 100% and the temperature range of 3200K to 6500K. The light is also capable of producing RGBb color and it can emit 36,000 different colors. The maximum light output at 0.3m is 1000 lux. It has a built-in battery which is good for about 75 min at full power and it uses Type C PD quick-charge technology.  The unit will be available this summer for a price of $79.

Another, much larger RGB light introduced in NAB this year by Aputure is the WRGB 300W Panel. This pro-level panel will include effects like paparazzi, fireworks, TV, pulse, fire, party,  police car and more. It will also be available in the summer for under $1700.

The final product introduced by Aputure is very different. It is called the Aputure AL-RC Lightbulb and it is a 5W A22 WWRGB Bulb which is flicker free with 3200K to 6500K range with a 1000 lux at 0.3m or 1 feet. It will cost just under $60 and will include a special type of network to communicate between different bulbs.

Zylight Go-Panel with active diffusion – one of the most interesting lighting technologies demonstrated in NAB this year came from Zylight and the special ingredient is not even the screen but the built-in diffusion which uses a layer of LCD (semi-transparent one of course) to control the amount and type of diffusion. About a year ago Chimera demonstrated a similar active diffusion technology which has yet to reach the market on its own (we don’t know at this stage if the two technologies are similar or connected in any way). At the moment, the light is still a prototype so we will have to wait to get pricing and more technical details and hopefully test it as well. 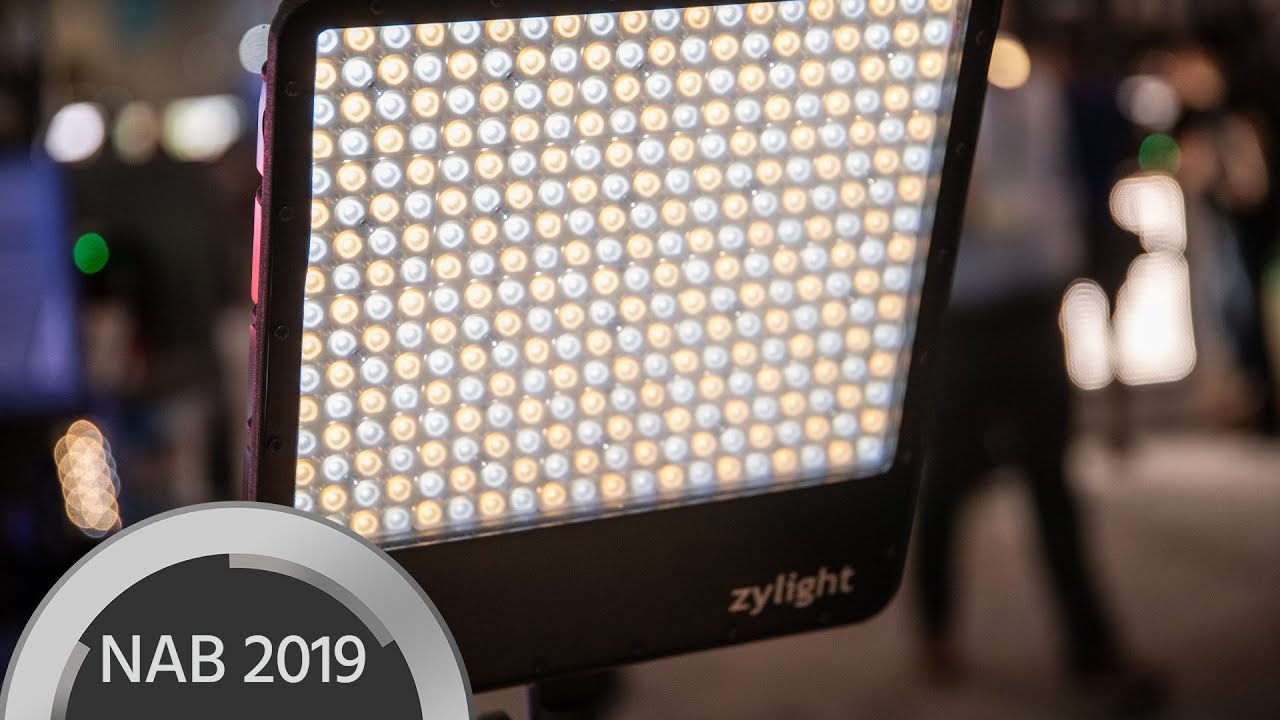 Luxli Viola 2 – second generation compact RGB light with filters and effects. The unit works with an app (which will be updated soon with new features). Pricing is just under $240.

A look at the Luxli Viola 2 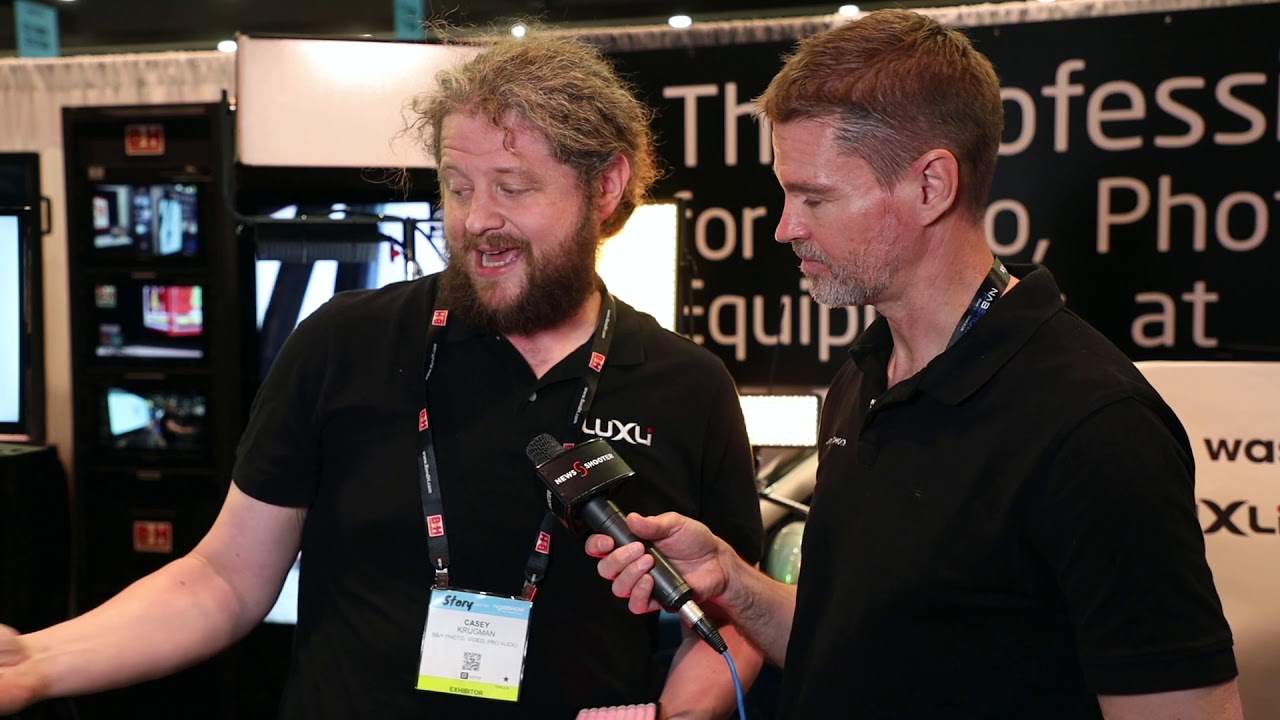 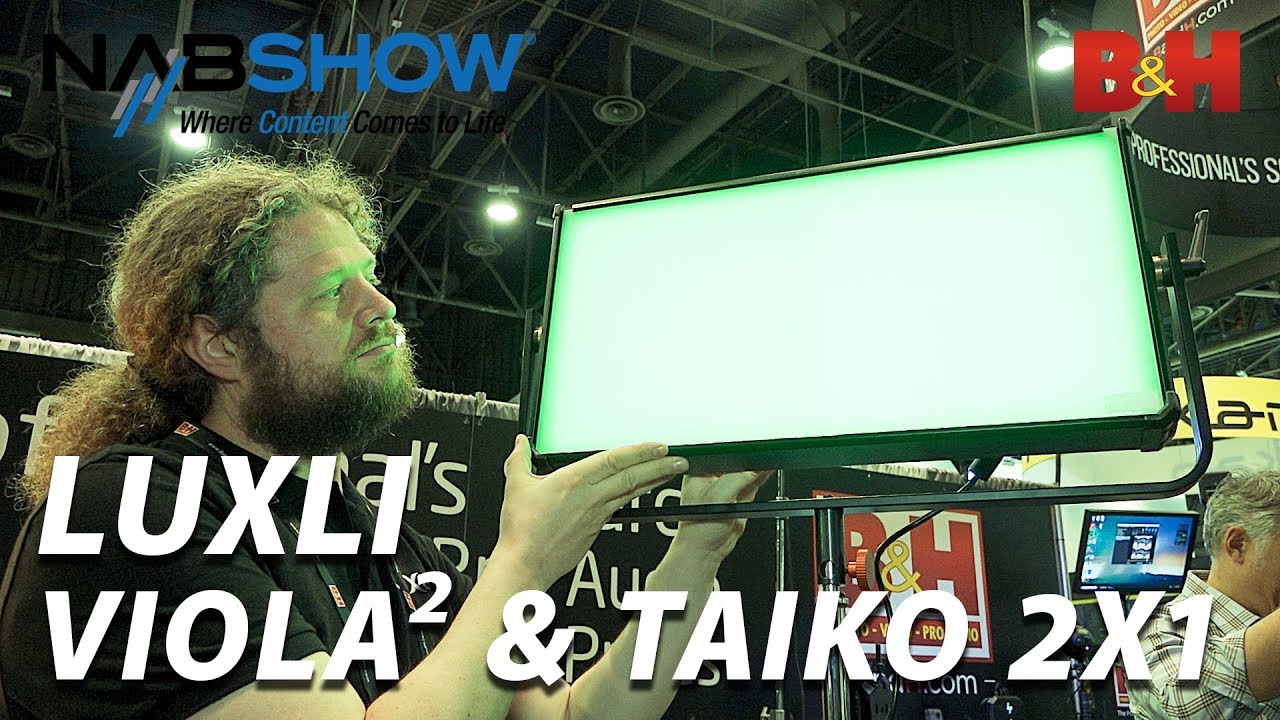 Spiffy Gear introduced its own innovative product – the Lumee wearable LED.  These tiny bracelet style high-quality LEDs (there is an RGB and a regular version) it is magnetic so you can hand it to a metal or connect it to anything. It has a built-in battery good for an hour and they have effects – really cool idea. The availability and pricing are going to be around $50 in May. 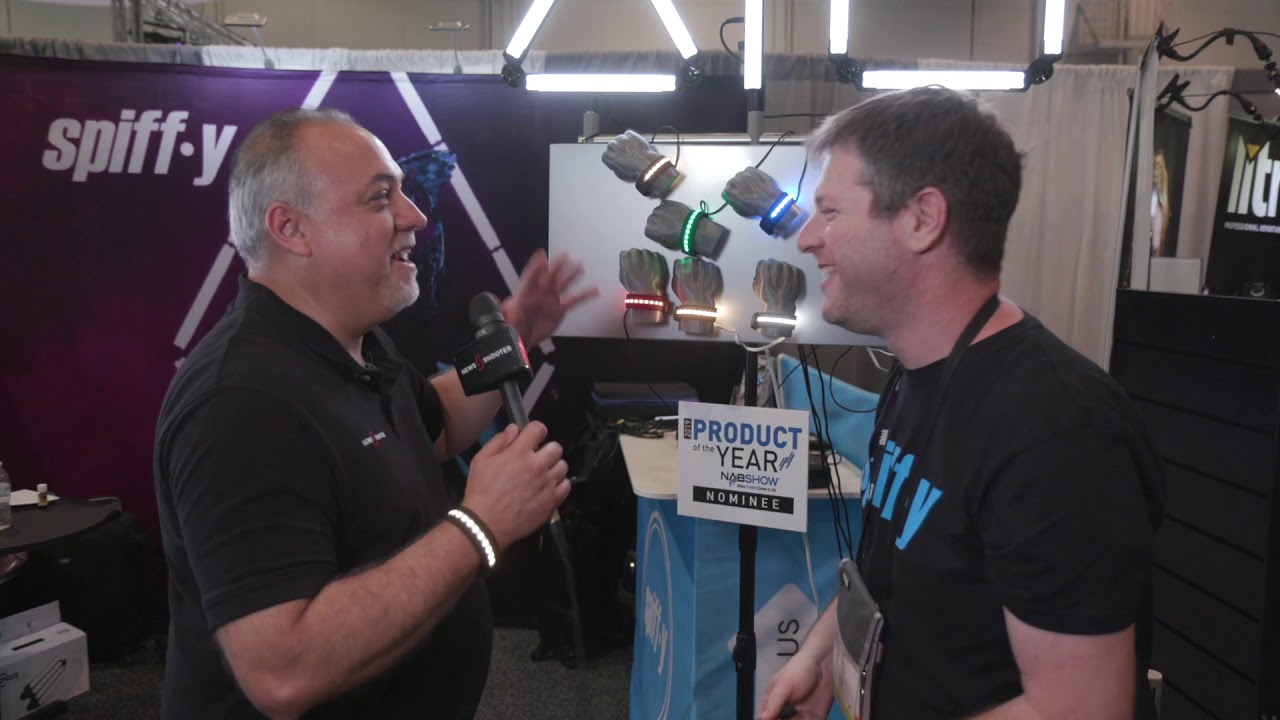 LiteGear introduced a full-color flexible mat called the LiteMat Spectrum LED panel. This super powerful unit has a temperature ranging from 2000-11,000K, there will be several sizes and pricing will range between $2700 and $4500 depending on the size. 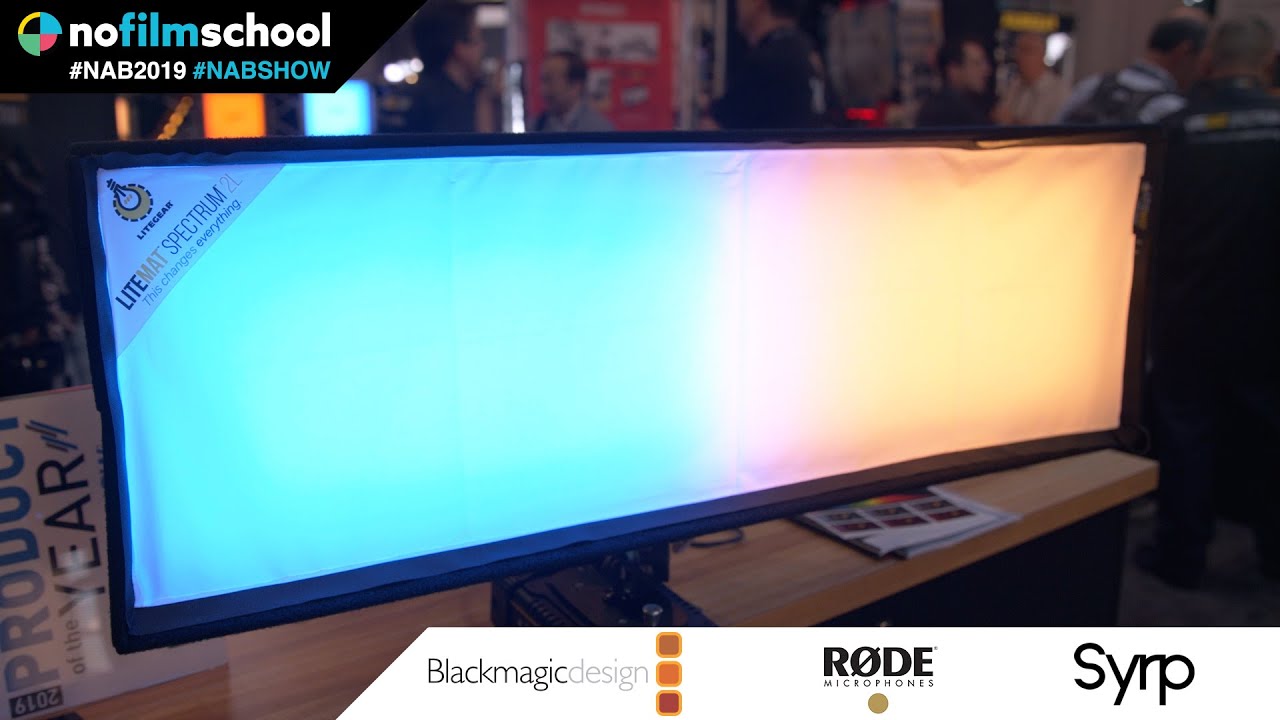 Another interesting light announced in NAB this year is the Italian Kinotehnik Practilight 802 LED. This light is very compact and rugged but extremely powerful for a 90W light (about 5000 lux at 1m with diffusion). It is app controlled and it is shipping now for $1200. 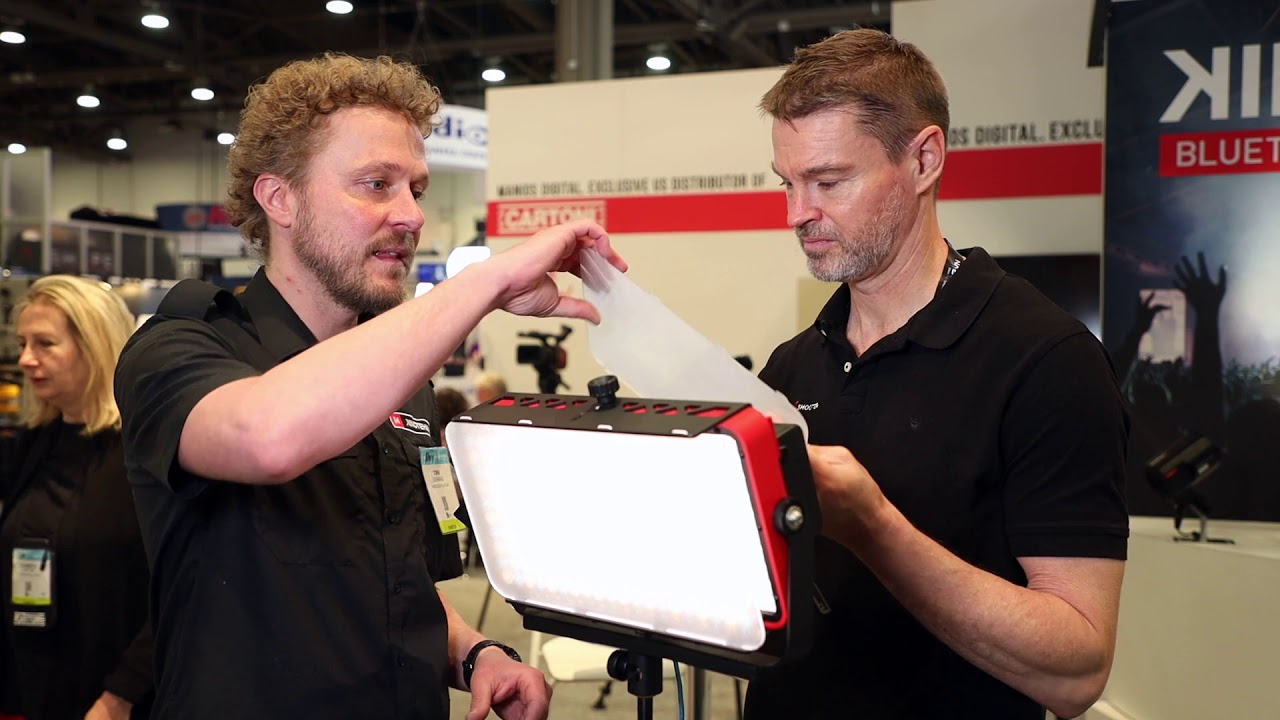 Our final light in this roundup is the Nanlite Forza series includes 3 COB lights, the smaller one is only 60W but it is tiny and handheld and there are 300W and 500W (the last one is incredibly powerful), all have effects (which is just an industry standard). The lights will be available in the summer. As for pricing, the 60W will sell for $290, the $300 will go for $1000 and the huge 500W will sell for $1850.

A look at the Nanlite Forza series 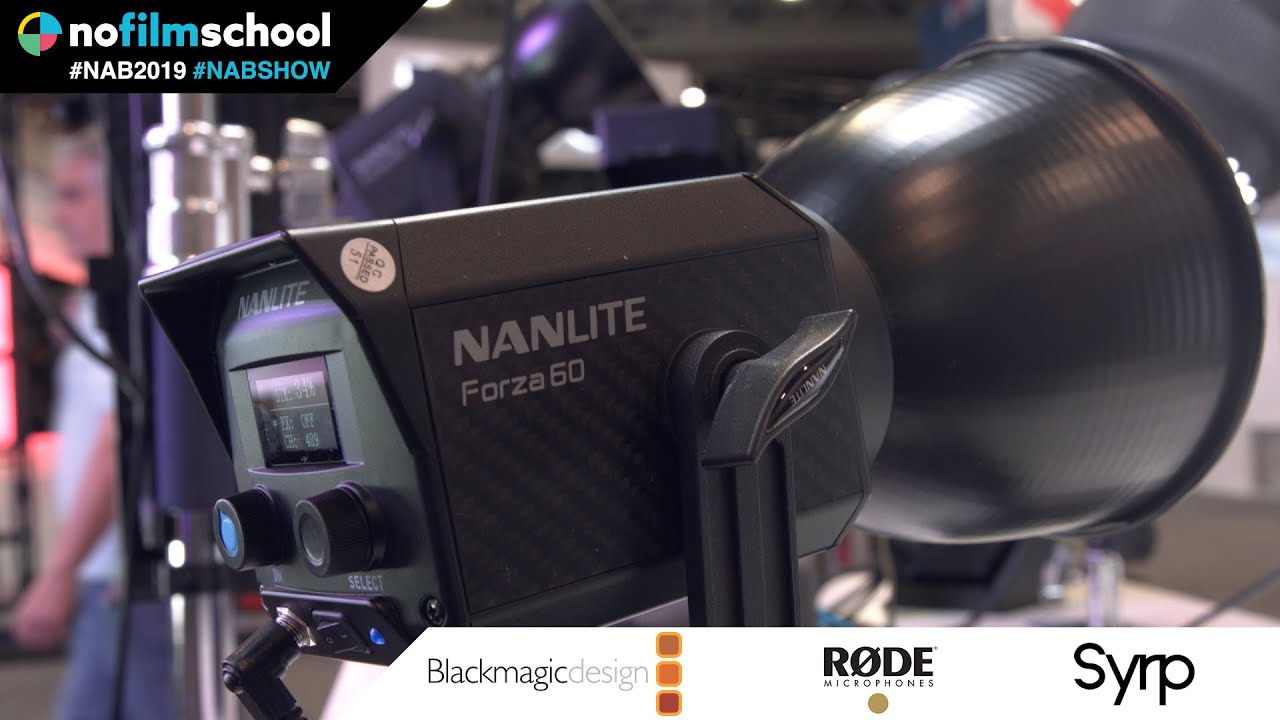 Update: Aladdin introduced a new flexible series of RGB lights with a super high color reproduction of 98 CRI. They come in 1×1 and 1×2 flavors and are remote or app controlled with a very small controller and a number of diffusion options.

The Aladdin ALL-IN light panels are flexible lightweight LED panels with high CRI of 98. They come in two sizes – 1×1 and 2×1 – and either as a bi-color only or bi-color combined with RGB. The panels can be controlled via wireless remote or smartphone app. prices start at around $700 for the smaller 1×1 panel and $1200. 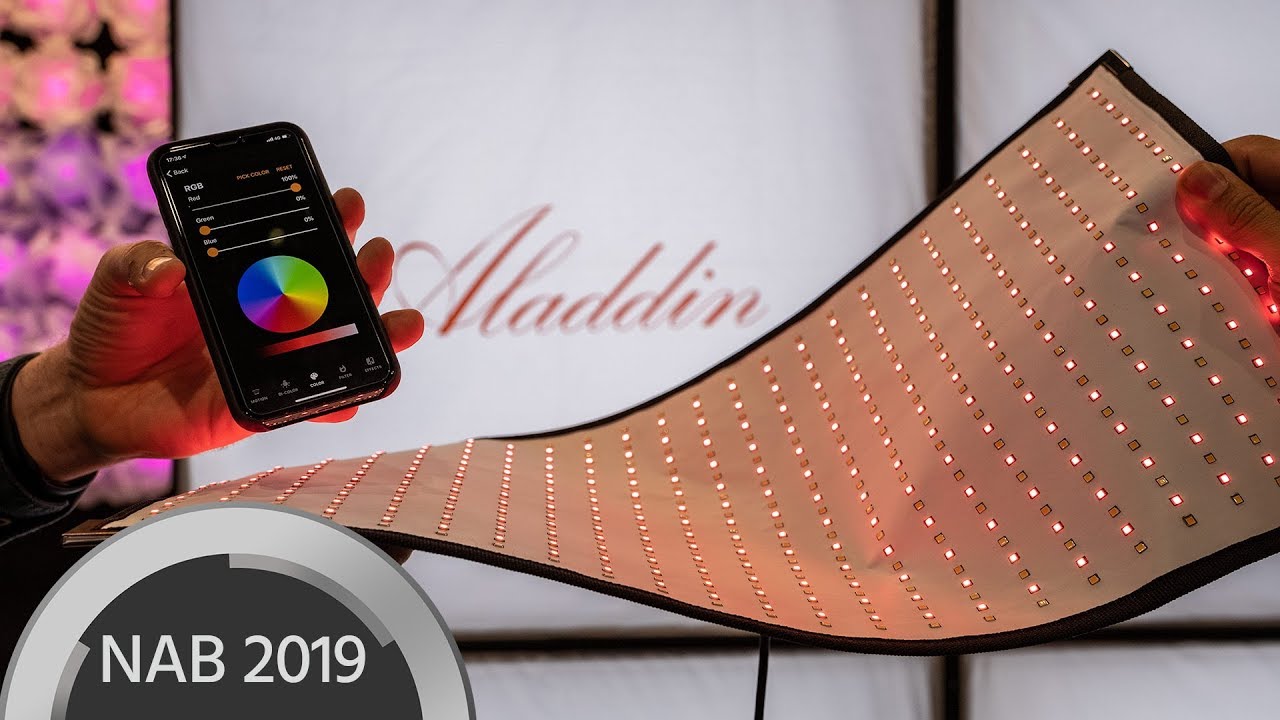 We hope that we will get a chance to test some of these lights later this year when they become available and for the time being, we shall continue with our NAB 2019 coverage so stay tuned!