An interesting announcement just came in from YC Onion, an innovative group that designs and manufactures creative camera gear. The Indiegogo project announced by YC Onion is called Chips 3.0 motion control system and is a hybrid slider and motorized dolly which integrates linking with a gimbal (DJI and ZHIYUN and Feiyu) to create 5-axis motion or a motorized dolly.

The Chips 3.0 advance motorized slider dolly promises to help with capturing cinematic motion by moving the camera along a line or a curve. This is a versatile system that can be set up on any flat surface. This kind of motion could be ideal for interviews, reveal shots, motion or time-lapses, and even star trails.

The slider with the optional accessory arms The YC Onion team believes that they understand how much gear can get in the way of taking the best shots, so their products aim to combine existing gear into portable and modular systems. The Chips 3.0, while lightweight and compact has enough power for a wide range of shooting setups. 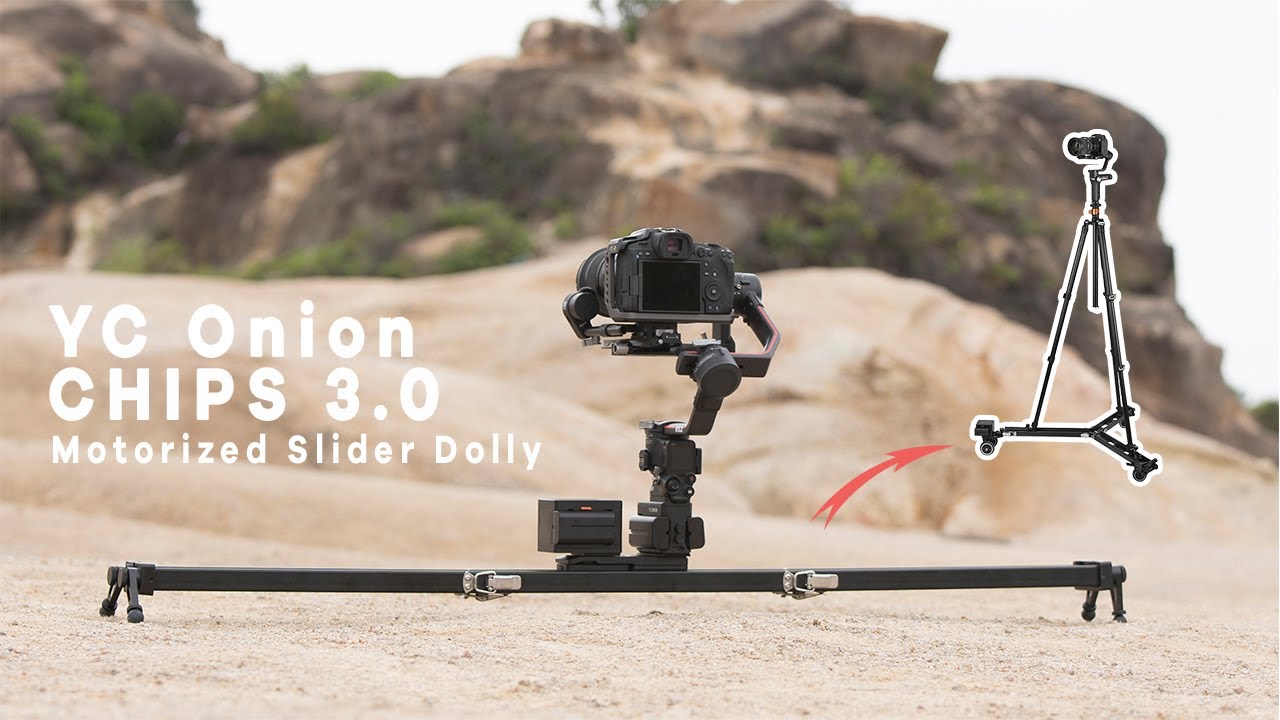 Playing nice with all sorts of gimbals

When combined with a DJI, Zhiyun, or Feiyu gimbal, the Chips 3.0 can provide up to 5-axis motion control in a few simple steps easy enough for a beginner to learn (we will put this claim to the test later this year when our review sample arrives).

The Chips 3.0 Motorized Dolly’s 5-axis interlink motion is controlled through the app. The user can independently control movement on each of the axes, as well as sliding and focusing. Integrating cross-brand gimbal technology is a concept pioneered by YC Onion.

This compatibility makes CHIPS 3.0 a very versatile system that is fast to deploy and simple to use. It features touchscreen controls, letting users focus more on the shot, and less on operating the equipment. The YC Onion App looks promising as well, giving users full remote control and the ability to easily create movement keyframes.

Another feature that the Chips 3.0 offers is its payload capacity of 20kg (44lbs) on the horizontal slider (at least on paper, this is a lot more than most ordinary sliders). This payload would make it compatible with pretty much any camera/lens and gimbal combination, including large film camera rigs.

When used in the dolly mode you can attach a tripod to the three metal parts (which otherwise are used to make the slider) as well as the motor and wheels that come with the kit. You will need to supply your own tripod (or get a kit with one) – one with 3/8″ legs that you can screw off and attach the supplied connectors.

Along with the 10-hour battery run time, the Chips 3.0 comes with a number of power options, which is always a big plus for any motorized system. Being able to run the dolly from different power sources will make sure it’s always ready to get the shot.

Night shots with a slider+gimbal

YC Onion also introduced the Burger Pan Head motorized robotic head which can also be used for time-lapses which you can see in the video below as part of the campaign (it sells as part of a kit with the Chips 3.0 and at the moment we are not sure what its price will be on its own).

As mentioned the Chips 3.0 is currently raising money on indiegogo starting from $570 (for the first 20 units). If you want a kit you can get the Chips 3.0 with dual pan-tilt heads for $1170 (all on the indiegogo link).