Leica has finally released its long-awaited update to its high-end Medium Format camera the S3. This 64MP beast was first demonstrated during Photokina 2018 and after some delays, it will be officially available later this month.

Externally the S3 is very similar to the existing Leica S2 model, introduced over a decade ago, but the big changes are, as you might expect, mostly inside the camera. The sensor of the S3 is a new Leica ProFormat CMOS sensor with a 3:2 aspect ratio and 30 x 45mm size (this is larger than a Full Frame sensor but a little smaller than the Fujifilm GFX sensor which is 33 x 44mm and much smaller than the size of a Hasselblad H6D which is 40 x 53.4mm).

The resolution of the new sensor is significantly higher than its predecessor at 64MP (compared to 37MP of the S2), but compared to the Fujifilm GFX 100 (with 102MP sensor) or the super high end (and super expensive) PHASE ONE XF IQ4 150MP it is not particularly high these days (even the Sony A7R IV has practically the same resolution although it is only a FF camera).

The S3 – externally very similar to the previous generation The S3 has a Leica Maestro II processor with 2GB buffer that can give it a 6 DNG or RAW files or unlimited JPEG files at 3 fps (MF cameras were never designed for sports shooting but more for the slower and more controlled paste of studio and landscape/architecture work).

Unlike the Fujifilm GFX 100 the Leica S series is essentially a large sensor DSLR (i.e. it uses a mirror unlike the mirrorless design of the GFX cameras which use an EVF). This is not necessarily better or worse and there are those who still prefer an OVF over an EVF. Here are some specs for the Leica S3:

This is a good time as any to re-post our interview from Photokiona 2018 with Mr. Stephan Daniel from Leica where we discussed the S3 (and a few other products).

We talked to Mr. Stephan Daniel during Photokina 2018 about the S3 and more 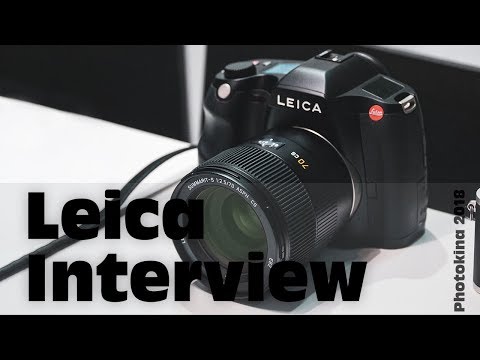 In this video, photographer, Christopher Frost, takes a look at the new Tamron SP 35mm f/1.4…